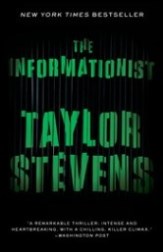 The Informationist: Crown, 2011 Fans of Lee Child's Jack Reacher will love Vanessa Munroe--a resourceful loner who grew up overseas and has combat training, a wry sense of humor, and plenty of sex appeal. Vanessa Munroe deals in information--expensive information--working for corporations, heads of state, private clients, and anyone else who can pay for her unique brand of expertise. A Texas oil billionaire hires her to find his daughter who vanished in Africa four years ago. Pulled into the mystery of the missing girl, Munroe finds herself back in the land of her childhood, betrayed, cut off from civilization, and left for dead. If she has any hope of escaping the jungle and the demons that drive her, she must come face-to-face with the past that made her who she is.

The Innocent: Crown, 2012 Eight years ago, a man walked five-year-old Hannah out the front doors of her school and spirited her over the Mexican border, taking her into the world of a cult known as The Chosen. For eight years, followers of The Prophet have hidden the child, moving her from country to country, shielding the man who stole her. Now, those who've searched the longest know where to find her. They are childhood survivors of The Chosen, thirty-somethings born and raised inside the cult who've managed to make a life for themselves on the outside. They understand the mindset, the culture within that world, and turn to Vanessa Michael Munroe for help, knowing that the only possibility of stealing Hannah back and getting her safely out of Argentina is to trust someone who doesn't trust them, and get Munroe on the inside.

The Doll: Crown, 2013 When a human trafficking ring kidnaps Munroe to transport a high-profile starlet, she's prepared to destroy those responsible--until she discovers that to save one life, she will condemn the person she loves most. Plunged into an underground world where women and girls are merchandise and a shadowy figure known as The Doll Maker controls her every move, Munroe must choose who lives, who dies, or find a way to outthink and outsmart a man who holds all the cards. In this high-octane thriller for fans of Lee Child, Barry Eisler, and Robert Ludlum's Bourne trilogy, Vanessa Michael Munroe will have to fight fast, smart, and furiously to overcome a dangerous nemesis and deliver her trademark brand of justice.

What the Critics Say: The Doll | Read an excerpt of The Doll

The Vessel: Crown, 2014 Some people were easy to find. Others took hunting and patience. The most difficult was a target who knew she was coming, and he knew. How could he not? When you backed a predator into a corner, when you took and destroyed all that she loved, when you made a game of ruining lives and sadism for you was sport, but then you failed to kill the predator: you’d better know she was coming back. This was an inviolable law. She wasn’t dead, and so she was coming for him. She had his face, had the name of a city. In the right hands, anything could be mined into so much more. She would find him. Kill him. Simple as that. 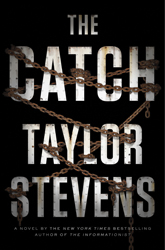 The Catch: Crown, 2014 Lied to, set up for failure, and working as part of an armed escort hired to protect a freighter through Somali waters, when pirates attack, Munroe abandons her betrayers, taking the captain with her. Pursued relentlessly in a country where she has no contacts or prior connections, she discovers too late that it was never the ship or the cargo that the hijackers were after. Attacked and left for dead, working with limited resources and a damaged body, Munroe will draw on what strength and strategy she has left, use the captain as her one bargaining chip to reverse roles, become the hunter, pull together her own agenda and, if she can, walk out of this one alive.

What the Critics Say: The Catch | Read an excerpt of The Catch 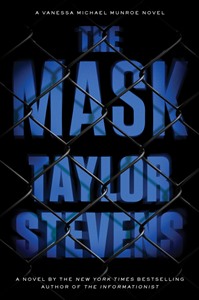 The Mask Crown, 2015 Vanessa Michael Munroe, chameleon and information hunter, has a reputation for getting things done: dangerous and not quite legal things, in some of the world’s deadliest places. Still healing from a brutal attack that left her near death, Munroe joins her lover, Miles Bradford, in Japan where he’s working as a security consultant protecting high-value technology from industrial espionage. In the domesticity of their routine Munroe finds long sought-after peace—until Bradford is arrested for murder. She will soon discover how far she’ll go to save him from twenty years in locked-up isolation; how many laws she’ll break when the truth seems worse than his lies; and who to trust and who she’ll kill. Because she’s a strategist and hunter with a predator’s instincts, and the man she loves has just stabbed her in the back.

What the Critics Say: The Mask | Read an excerpt of The Mask

Liars' Paradox: Kensington, 2019 They live in the shadows, Jack and Jill, feuding twins who can never stop running. From earliest memory they’ve been taught to hide, to hunt, to survive. Their prowess is outdone only by Clare, who has always been mentor first and mother second. She trained them in the art of espionage, tested their skills in weaponry, surveillance, sabotage, and nerve-wracking psychological games. As they grew older they came to question her motives, her methods—and her sanity . . .

Now twenty-six years old, the twins are trying to lead normal lives. But when Clare’s off-the-grid safehouse explodes and she goes missing, they’re forced to believe the unthinkable: Their mother’s paranoid delusions have been real all along. To find her, they’ll need to set aside their differences; to survive, they’ll have to draw on every skill she’s trained them to use. A twisted trail leads from the CIA, to the KGB, to an underground network of global assassins where hunters become the hunted. Everyone, it seems, wants them dead—and, for one of the twins, it’s a threat that’s frighteningly familiar and dangerously close to home . . . 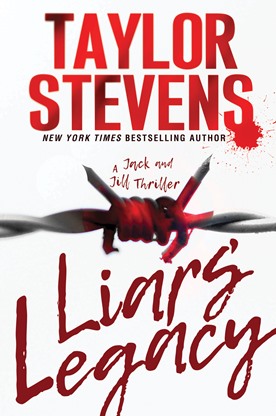 Liars' Legacy Kensington, 2020 The broker is dead. The network he controlled has lost its restraints leaving the world’s deadliest killers free to pursue their own vendettas and political agendas. The United States government, unwilling to risk upheaval and global chaos, has mobilized killers of its own to preemptively hunt down and destroy each potential threat. Among the most dangerous on that list are Jack and Jill. Often estranged—always connected by a legacy they can’t escape—the siblings have eluded many who want them dead.

Boarding a flight to Europe to meet their estranged father, they suspect a trap. What they can’t predict is how far a high-level Russian operation will go to secure their skills, or how hard the U.S. operatives sent to stop them will fight to assassinate them first. Caught between two superpowers with unlimited resources and unable to trust each other, brother and sister will match wit against skill in a life-threatening chase across Europe, back to the United States, and into an unholy alliance that could change the balance of global power forever.